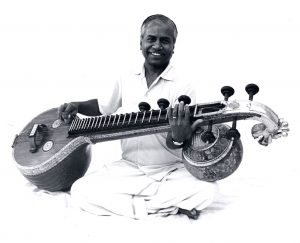 When I first arrived in Madurai in June, 1970, I was taken to the Sri Sathguru Sangeetha Vidyalaya, the music college affiliated with Madurai University and introduced to the Principal, Sri S. Ramanathan. I told Sri Ramanathan of my interest in studying mrdangam, to which he genially replied, “Oh, yes, we have a great mrdangam teacher here in Madurai; I will take you to him. But mrdangam is an accompaniment instrument. You should also learn vocal music so that you know what you are accompanying.” I thanked him and agreed that this was a good idea. He then said, “Fine. You can learn from me. You can come to my house.

The next day he took me to meet Sri Sankarasivam, and then to his own house, where we began singing lessons. His house was always full of students of all ages and levels of experience, and it seemed that he was always teaching. In Middletown two years later, he opened his home to me again. I stayed with him and his daughter Geetha while I worked on my Senior Thesis. Again, his home was always open to students, including some who became well known. One day there was a knock on the door. When I answered it, a man just a few years older than I was standing there. “Is Mr. Ramanathan at home?” he asked, an English accent confirming my suspicions as to his identity. I said that he was not, and the young man said, “Well, my group is performing here tonight. I brought some tickets for you all.” So we all went to hear John McLaughlin’s Mahavishnu Orchestra.