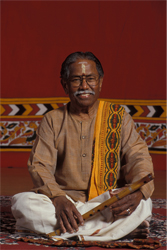 T. Viswanathan (August 13, 1927-September 10, 2002) was truly unique in his ability to maintain the cultural and aesthetic values of his family and teacher while teaching students half a world away from his homeland. Viswa, as he was known to all, was born into one of the most illustrious music and dance families of South India and was one of India’s most noted and respected musicians.

His grandmother, Veena Dhanammal, was considered one of the finest veena players of her century. His sister, T. Balasaraswati, was regarded as the greatest exponent of Bharata Natyam, the classical dance of South India. At an early age, he was sent to live and study with his flute teacher, T.N. Swaminatha Pillai, and throughout his entire musical career he wove the two styles, that of his family and that of his guru, into a seamless musical art.

Viswa studied ethnomusicology at UCLA on a Fulbright scholarship from 1958 to 1960, and was head of the Department of Music at Madras University from 1961 to 1966. He taught at UCLA, California Institute of the Arts, and Wesleyan University, where he was a member of the music faculty since earning his Ph.D. in 1975.

In 1976 Viswanathan and his brother T. Ranganathan (Wesleyan’s first Artist in Residence in Music) recorded the musical accompaniment for “Bala,” a film on the life of their sister, produced and directed by Satyajit Ray. Other recordings by Viswanathan include “South Indian Flute” (World Pacific), “Pallavi” (Nonesuch Explorer Series), “South Indian Classical Flute,” (JVC), and “Tribute” (V.G. Arts).

Viswanathan received some of the most prestigious awards in India and the United States, including the President’s Award from the Sangeet Natak Akademi (1987), Sangita Kalanidhi (“Treasure of Musical Art”)—the highest award given to a South Indian musician—from the Music Academy in Madras (1989), and a National Heritage Fellowship from the National Endowment for the Arts (1992).

More important than his impressive achievements around the world, Viswa was beloved by his family, friends, colleagues and students as a considerate, loving, and generous man, one who faced illness, personal disaster, and all manner of adversity with cheer, good humor and music. He was a great and committed teacher, and a cornerstone of Wesleyan’s music program. Saddened as we are by his loss, we are also inspired by his example as musical genius, teacher, colleague and friend. He lives in our memories and hearts as we dedicate ourselves to the fulfilment of his legacy.

In his later years Viswa was my friend and mentor. He made time for frequent rehearsals, which he surely did not need, and used me as his accompanist whenever he could. The time we spent together made it possible for me to absorb the nuances of his beautiful and challenging music, and prepared me not only for our concert tours in China, Europe, and Ireland, but for the rest of my life in music. I will always cherish the memory of our time together.