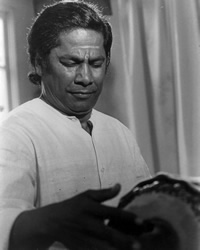 T. Ranganathan (March 13 1925-December 22, 1987) came from a devadasi family of hereditary musicians and dancers that traces its musical lineage to all three composers known as the Trinity. His grandmother, Veena Dhanammal (1868-1938), was respected far and wide in the man’s world of Karnatak music. His sister T. Balasaraswati (1918-1984) achieved worldwide recognition for her performance of bharata natyam, South India’s classical dance. With his brother, flautist and singer T. Viswanathan (1927-2002), he established Karnatak music in the United States. Ranganathan learned from the legendary master Palani M. Subramania Pillai (1908-1962). A brilliant and sensitive (if under-rated) mrdangam player, Ranganathan was also a great teacher who dedicated his career to teaching his non-Indian students at Wesleyan and CalArts. He forged his own approach to bharata natyam accompaniment, influenced by Balasaraswati’s drummer, the intuitive genius M. Kuppuswami Pillai.

I first met Ranga (we all called him that) in 1972. He and Viswa had come to Wesleyan for a Navaratri concert. I was learning from Sri Raghavan at the time, and was invited to his home to meet these visiting dignitaries. I had heard recordings, and I already knew that they were wonderful teachers. Viswa had taught the amazing Jon Higgins, and Ranga had a student, Doug Knight, whose playing I admired. But I wasn’t prepared for the people at Raghavan’s house—they were unlike any other South Indian musicians I had met. They were casual, funny, ribald, and I found them utterly charming.

I was asked to play a sruti-petti (drone instrument) in their concert the next night. Seated directly behind Ranga, I was able to listen to every nuance of what he played. I was transported. I had never dreamed the mrdangam could sound like that, or be approached in such an imaginative way. I must have looked awestruck; two or three times during the concert he turned around and winked at me. Though I didn’t know it at the time, my life’s course was set. I made my way to Seattle for the ASEA summer program the following summer, and heard his other remarkable students, most notably Glenn (Rusty) Gillette. It was clear that Ranga was the teacher for me. I spent most of the next fifteen years learning as much from him as I could, and all the years since trying to put it into practice. I’m still chasing that sound.