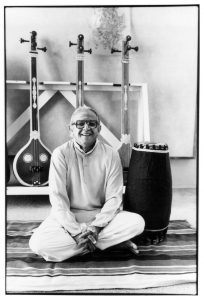 Ramnad V. Raghavan (1927-2009) came from a distinguished family of musicians that has produced, among others, his brother Ramnad V. Krishnan (1918-1973) and internationally known violinists L. Subramaniam and L. Shankar. Sri Raghavan learned mrdangam from his brother Ramnad Easwaran, a student of C.S. Sankarasivam. He served as Artist in Residence in Music at Wesleyan University from 1970-1975, and again from 1988-2000, following the death of T. Ranganathan. In the years between his Wesleyan appointments he lived in Cleveland, where he was a founding organizer of the Cleveland Aradhana. During his years at Wesleyan Sri Raghavan taught hundreds of students, some of whose careers were profoundly influenced. Among these are percussionists Glen Velez and Jamey Haddad

I went to Middletown to study with Sri Raghavan during my Senior Thesis quarter as a student at Kalamazoo College, and moved back to Middletown after I graduated in 1972. Sri Raghavan welcomed me warmly, happy to have a student who had learned from Sri Sankarasivam in Madurai. He treated me like family, and over the years was an unending source of good advice and encouragement. His generosity of spirit is extraordinary; it is exemplified by his willingness to let me play along with him in many concerts accompanying T. Viswanathan. At the annual Tyagaraja Aradhana at the Sri Satynarayana temple in Middletown, he set a wise and potent example for me as we accompanied the Pancharatna kritis together over several years. After his retirement from Wesleyan in 2000 he moved to Chennai with his wife Sarada, where he lived until his death.