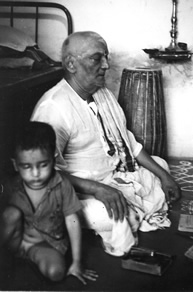 Ramanathapuram Sri C.S. Sankarasivam (1905-1993) was a musician in the court at Ramanathapuram. Later he was the Principal of Sri Sathguru Sangeetha Vidyalaya, the music college affiliated with Madurai University. He was a rare person, equal in his mastery of the melodic and rhythmic aspects of Karnatak music. Sri Sankarasivam was known as a great teacher in both realms. Among his many students were the eminent vocalists Ramnad V. Krishnan and T.N. Seshagopalan, and influential percussionists C.S. Murugabhoopathi, his younger brother, and Kanjira genius G. Harishankar.

When I arrived in Madurai in 1970, Sri Sankarasivam had retired as Principal. I was taken to his home by Sri S. Ramanathan, who had taken his place. As I sat on the floor the two musicians conversed in Tamil, which I did not yet understand. After some time, Sri Sankarasivam looked at me and asked Sri Ramanathan whether I was British or American—this much I understood. The Principal assured him that I was American, and the great teacher said, “Seri. Naaliki va.” (Okay. Come tomorrow) Which I did, for nine months of tomorrows, six days a week.